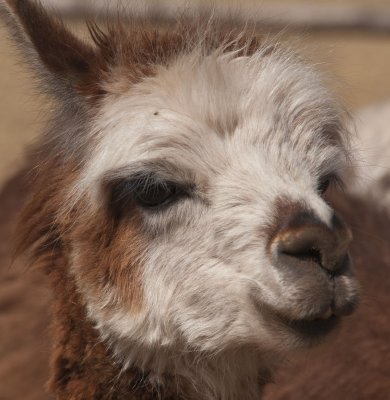 Arrived in Lima with everything we owned soaking wet from the humidity and sweat of the jungle, so first thing, a jumbo laundry bag sent out. Lima was OK, but like any big city. It was really cold though, especially when compared to the jungle. It’s their winter, which means the city is covered with a low hanging cloud, lasting for several months. At night, the cloud/fog descends to the city and moistens everything. It apparently never rains in Lima? A local told us he has never seen rain in the city in his lifetime. He was only about 25, but still… just strange. We spent the day wandering the streets and ocean front, constantly expecting the skies to open up on us; it was that dark and threatening, but, nope. Bad news for the umbrella industry I’m thinking.

Next day we flew into Cusco. The airport is filled chok-o-blok with tour operators, touts and stores – absolute crazy chaos. We were told that 600,000 people come through Cusco each year to visit Machu Picchu. 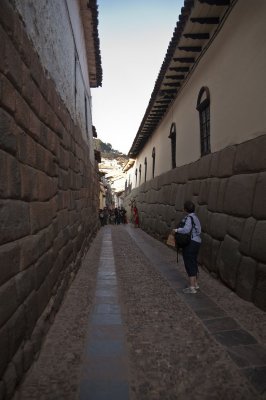 Inca foundations in the streets of Cusco

Our hotel, Casa San Blas sits on top of a hill in the old town. We spent the rest of our first day following the experts’ advice – doing didly squat. Lazing about, knitting, reading, and drinking a ridiculous amount of water to try to help adjust to the altitude of 3,400 metres or 11,150 ft above sea level. In the Amazon, I wished I had brought my tape recorder to capture the amazing sounds coming from the forest, especially at night. In Cusco, I thought the same thing, this time to capture the sounds coming from us after we climbed the rocky streets up to our hotel. Quite the symphony of gasps and pants, trying to get some oxygen into our lungs! 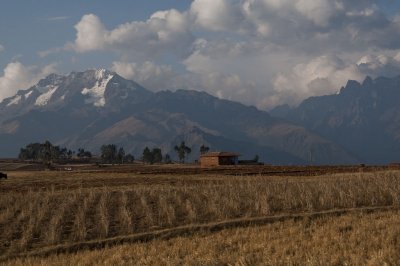 On the road in the Urumbamba Valley

We ventured out the next day for a full day tour of the Urubamba Valley – the Sacred Valley of the Incas. Driving through this valley was a trip back through time. It is an incredibly fertile area, with rolling hills of gold and iron-rich red soil. Towering peaks backdrop these fields and villages, some crested with snow, others with clouds and mist. The local peoples are out walking or working in the fields with their wonderfully colourful outfits accompanied by donkeys, llamas and alpacas. And seemingly every corner you turn as you wind through the valley are remnants of the incredible sophisticated and elaborate Incan civilization. The Incan farming terraces are still being used today as are many of the aqueducts and remarkable watering systems, all built between the 1100s to 1534, when the Spanish came in search of gold. This unique and advanced civilization was wiped out in a relative instant by the Spanish numbers, guns, horses and devastating diseases. 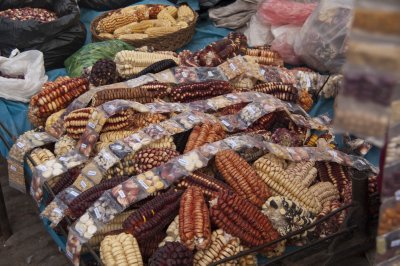 Our first stop was to Pisac market, which was much nicer and more fun than Otavalo. Especially the food market. Peru has over 1000 species of potatoes, 600 of them in this region of Peru and the sacks of potatoes in the market were fantastic. The variety and colours of the corn, natural dyes, peppers and other foods were exceptional. 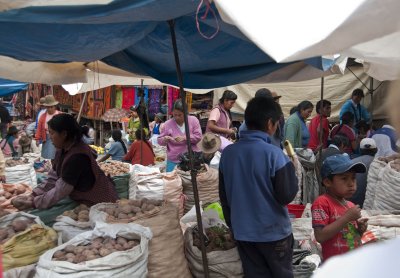 Mounds of potatoes in Pisac Market

We found a nice quiet corner of the market for a drink, that had a really nice house/pen for a bunch of really cute guinea pigs… right next to the huge oven :-o We’re going to try this Peruvian specialty later on, but really didn’t need to see the little cuties like that before eating them! 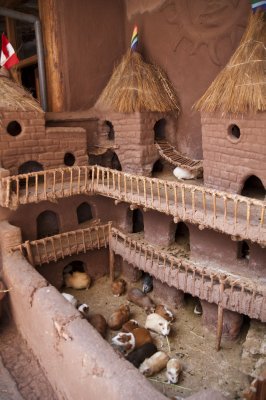 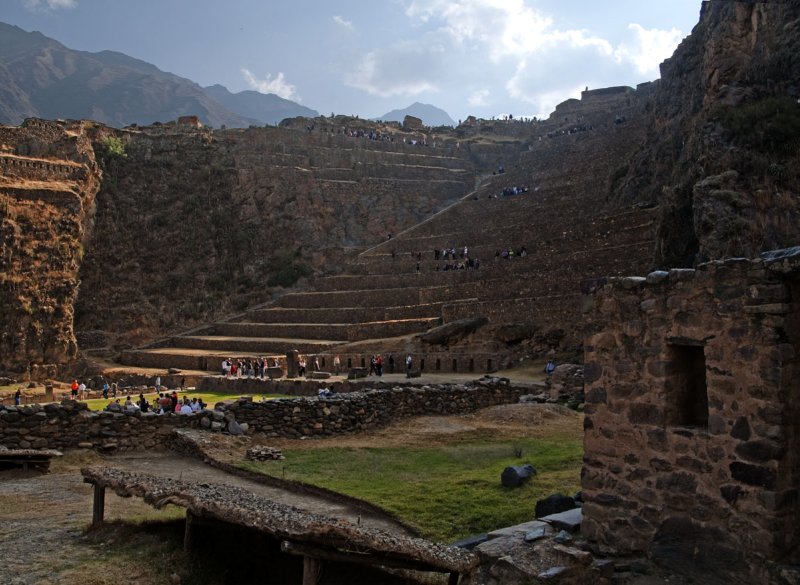 Our next stop was the last settlement in the valley before Agua Calientes and Machu Picchu called Ollantaytambo. The fortress/temple is built into the Cliffside at the end of a narrow valley and surrounded by towering mountains, the sides of which were lined with Inca farming terraces and stone sarcophagi. The perfect canals still carrying rushing water from the mountains to the town below. The Incas were actually able to successfully defend this site against the Spanish in 1537 and protected the Manco Inca. The site was originally thought to be built as a site of worship to the sun and moon and its temple entrances are aligned with the sun as it crests the mountain peak opposite the temples during the solstices. 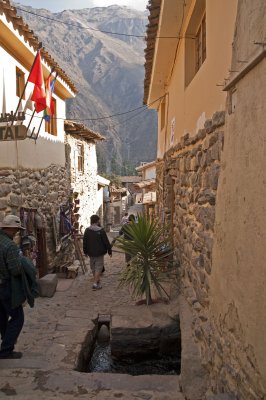 We climbed the steep 200 steps to the upper temples showcasing the typical incredible Incan stone engineering – massive granite stones transported from 7 kms away, and fitted together with such precision there are no gaps or mortar on the surface, yet filled with gravel and small stones in the interior so that they are the only structures in the valley to regularly and reliably withstand the many earthquakes of the region. We walked around the main structure and onto an Incan trail (one of several trails that eventually winds its way to Machu Picchu), to storehouses and other buildings that the archaeologists still debate about. The site appears not to have been completed with construction ramps used to bring up the massive construction blocks still in place. 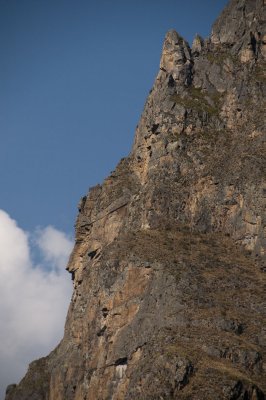 Face carved into mountain, suns rays shine from the crown, to the temple entrance during the summer solstice -- can you see it?

After Ollantaytambo (pronounced oleeyantaytambo – say that 3 times fast) we visiting the town of Chinchero to see an old colonial church, built of course on top of an old Incan sacred site, so the foundation is wonderful Incan construction and then on top the primitive construction methods of colonial Spain. 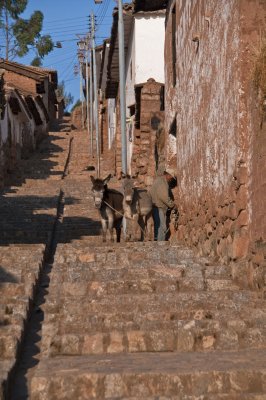 Donkeys going out for the day in Chinchero

The Catholic Church seems interestingly open and flexible in this part of the world. Sunday services are always full, with Spanish Catholics sitting in the pews, and the Quechuas sitting on the floor. The Quechuas are actually not coming not to celebrate catholic mass (in fact they don’t participate in the rites the priest delivers). They are coming instead to sit on the floor to be closer to their God – Pachamama, the earth mother – and because this site is one of their holiest places. The surprising thing to me was the tolerance and acceptance the priests and church have for this. It’s also interesting the views the Quechuas have on religions. The Quechuas or Mestizos (Spanish Incan mixed peoples) still worship in the old ways, ultimately to Pachamama, but they consider any and all religions as simply another possible path to help an individual to achieve enlightenment. This view seems to have allowed them to continue to worship and believe the way they always have, despite attempts to wipe out their culture.

Chincero also has an interesting version of a tuktuk. It looks very similar to the Indian style, but the cart is simply mounted onto a motorcycle, which is used to power the vehicle. 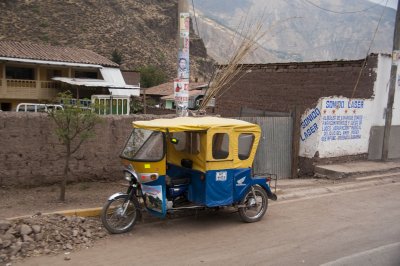 Monday we took a city tour of Cusco and nearby monuments. We had a wonderful guide for this tour – Fernando with a great sense of humour. Our first stop was the cathedral in Plaza de Armas. Completed in 1659 it was built, of course, on the foundation of an Incan Palace. In fact, if you look out over the town from the surrounding hills, every church you see was built on top of a sacred Incan site in an attempt to wipe out the religion and culture of the peoples.

The cathedral is beautiful but same old same old for Spanish colonial religious stuff. Carved wood leafed in gold, usual themed Catholic paintings, etc. Of course, all the artwork and construction was done by local ‘volunteer’ artists. This made for some really funny (and missed by the priests working so hard to build new Christian churches at every turn, all over the land) inserted Incan symbology throughout the church. There is a beautiful painting of the last supper but Christ et. al. are drinking the local corn drink chicha and eating roasted cuy (guinea pig)! Three major symbols of the Incans are the Condor, the Puma and the Snake. These are found throughout the church in paintings and carvings, which are surprising for the snake in particular, since Christian’s refer to the snake as an instrument in the fall from grace. The female/male balance, and all balance in nature, is extremely important to the Incan faith. On the arms of all the elaborately carved cedar choir-stall chairs, are the bare breasts of a woman, over the Incan phallic symbol. Wonder what happened when the priests finally realized? All in all, it was one of the more amusing and interesting church tours I’ve had in a while. 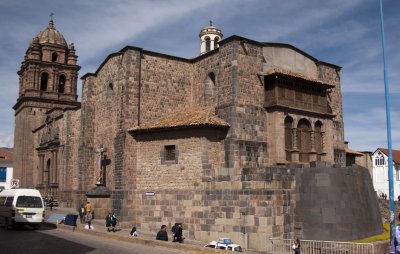 Ancient Incan Cusco was the centre of the Incan civilization and was laid out in the shape of a Puma, the head being the Temple of the Sun – the remains of which we visited next. It was originally covered in the metal of the gods – gold – and of course destroyed to make a Catholic convent. Machu Picchu is laid out in the shape of the condor. Lost Billyantambo is said to be in the shape of the serpent. But, it has yet to be discovered and is believed to be in the Amazonian jungle between the borders of Peru and Ecuador. 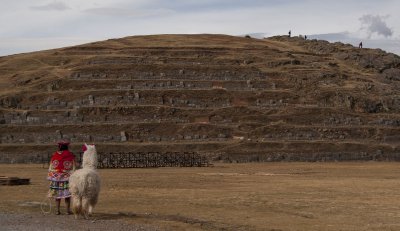 Just outside of Cusco is Sacsayhuaman. This massive structure is referred to as a garrison or fortress and is constructed of 3 stacked zigzagged massive stone walls. Only the bottom wall is still complete. It was most likely a religious temple, though most experts believe it had military significance. Many of the base stones are huge – some are 3.6 metres tall. 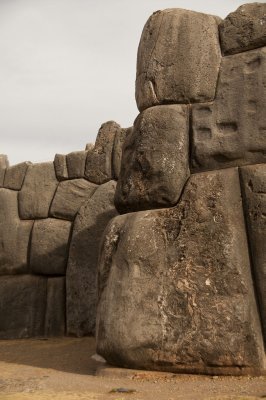 Also within this massive complex is Tambomachay, a small complex of terraces and pools fed by an underground spring that still runs. The waters are said to aid in fertility as well as being a fountain of youth! Must be true, because Fernando told us he was 89 years old! 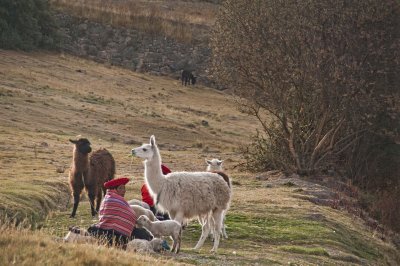 Our last full day in Cusco was free, so we went exploring and shopping. Was fantastic and long, but we are becoming used to the altitude. Still huffing and puffing, but don’t feel like you’re going to die now. That’s good! Our final meal in Cusco, and we had the local delicacy Cuy – roasted guinea pig. For my non-western friends, this is probably not a big deal, but in the west, guinea pigs are a very common children’s pet, so it was a bit odd to be gnawing on the bones of Fluffy. Still, it was delicious! And rather like a cross between duck and rabbit. Hope my nephew will forgive me :-o Oh yeah, and the Pisco Sour, with coca leaves – the best yet.

Next stop, one of the new 7 wonders of the Ancient World – Machu Picchu.

Posted by LisaOnTheRoad 23:28 Archived in Peru

Previous Next Table of contents

Comments on this blog entry are now closed to non-Travellerspoint members. You can still leave a comment if you are a member of Travellerspoint.

If you aren't a member of Travellerspoint yet, you can join for free.